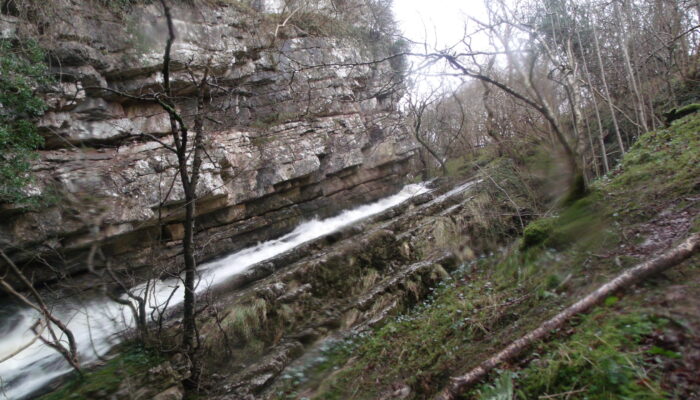 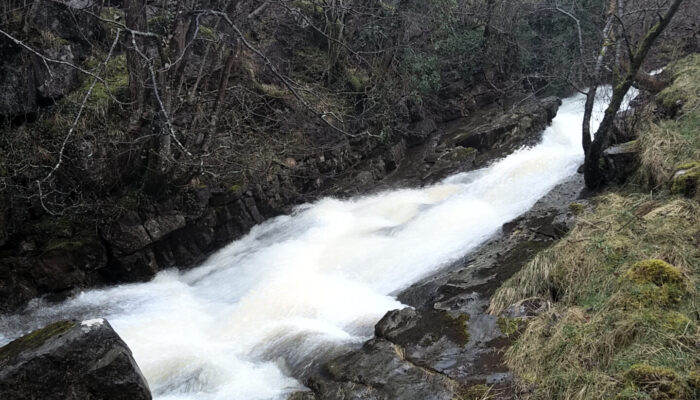 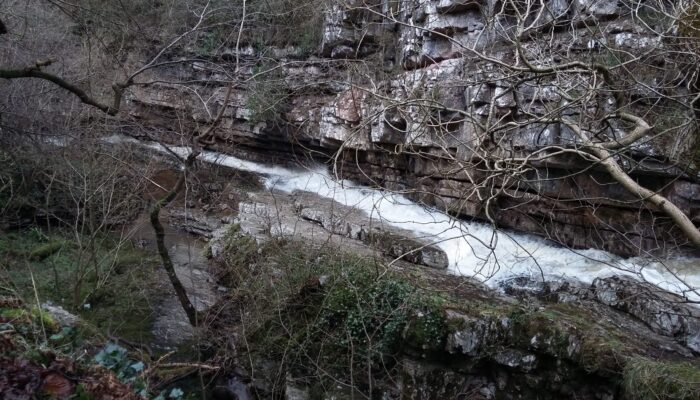 A couple of miles to the south-east of Kirkby Stephen, Ewbank Scar is a spectacular and intriguing product of geology and the action of running water that is well worth a visit. Here, a small beck takes a steep tumble through a narrow valley, its flow pressed hard against an imposing limestone cliff, giving the impression of an aquatic helter-skelter. Evidently named after some poor squire who took a terminal tumble over the cliff whilst riding his faithful, if incautious, steed, Ewbank Scar is guaranteed to impress and also instil a degree of curiosity and wonder.

If you are coming from Kirkby Stephen, you will first encounter the scar at its lowest point where the beck tumbles over a small waterfall and then proceeds to level out into a placid and relatively benign stream heading towards Hartley. Above this point, however, the beck assumes a steep slope with the water cascading over polished beds of limestone, bending right then left then right again as it descends. Above the beck, a precipitous cliff rises maybe 100 feet that is comprised of layer upon layer of 200 million year old limestone, rock that is being gradually and inexorably undercut by the irresistible action of the water. Large lumps of fallen stone lying in the path of the beck serve to illustrate the erosive power that the water is exerting on the cliff and, importantly, the fact that standing too close to its face may not be the wisest of ideas.

In summer the flow of water can decline to a mere trickle and even disappear altogether whilst in winter beck can appear quite spectacular as vast quantities of peaty water negotiate the narrow course of the scar. All this can be safely observed from the western side of the scar, a steep slope that is densely wooded, oozing with moisture and often quite slippy to walk upon. Here, ash, birch, hazel and alder grow in the damp soil whilst fungi of many types feast upon both the living and the dead trees lying amongst various ferns, mosses and other interesting flora. Stay quiet and still for a while and, if you a lucky, a red squirrel may be spotted amongst the trees whilst buzzards can often be seen lazily circling above the cliff.

After a period of climbing uphill you will see the beck level out for a while and it appears that things have returned to relative normality. However, walk on and up a bit further and another waterfall will appear and the beck reacquires its upward gradient in a cut that it has – presumably - created in the bedrock. Once at the top, a phenomenon that hints at a potential cause for this strange strange geological feature becomes apparent - if you are visiting in a period of dry weather that is. At the very top of the scar the beck can sometimes be seen to disappear completely in a dry summer, removing all flow of water from the scar. At such times all that will remain in the beck bottom are the odd pool, often populated by brown trout darting around in their somewhat diminished environment. The reason for the water’s summer disappearing act can often be seen – it simply runs down a sinkhole in the river bed to subsequently re-emerge at the very bottom of the scar, a phenomenon that is reasonably common in limestone areas where acidic water draining from the peaty fells erodes the bedrock and finds a temporary subterranean path for itself. As such, it would seem that a change in the underlying geology occurs at this point, a shift that has had spectacular consequences for the landscape.

To the untrained eye, how exactly Ewbank Scar came to be is difficult to fully fathom and some local sages claim that man has had a hand at some point in creating the features we see today. Whilst the possibility that ancient quarrying may well have contributed to what is seen cannot be dismissed, it is likely that by far the greater contributor to its creation is the power of water combined with some quirk of geology that makes the area ripe for erosion. Whatever the case, a visit is warranted so that you can see it for yourself and make up your own mind. It is unlikely that you will encounter another (human) soul on a visit to the scar and it is surprising that it is so unheralded as a place to visit.

To get to the scar, the easiest thing to do is to go to Stenkrith Park and walk along the disused railway. Before Podgill viaduct you will encounter a bridge across the line (it is the second one you will come to when walking from Stenkrith). Leave the railway line here and go across this bridge and pick up the footpath heading south. After half a mile or so you will meet a field-house next to a wood. Go into the wood and follow the path until the scar hoves into view – in wet weather you will hear it before you see it.