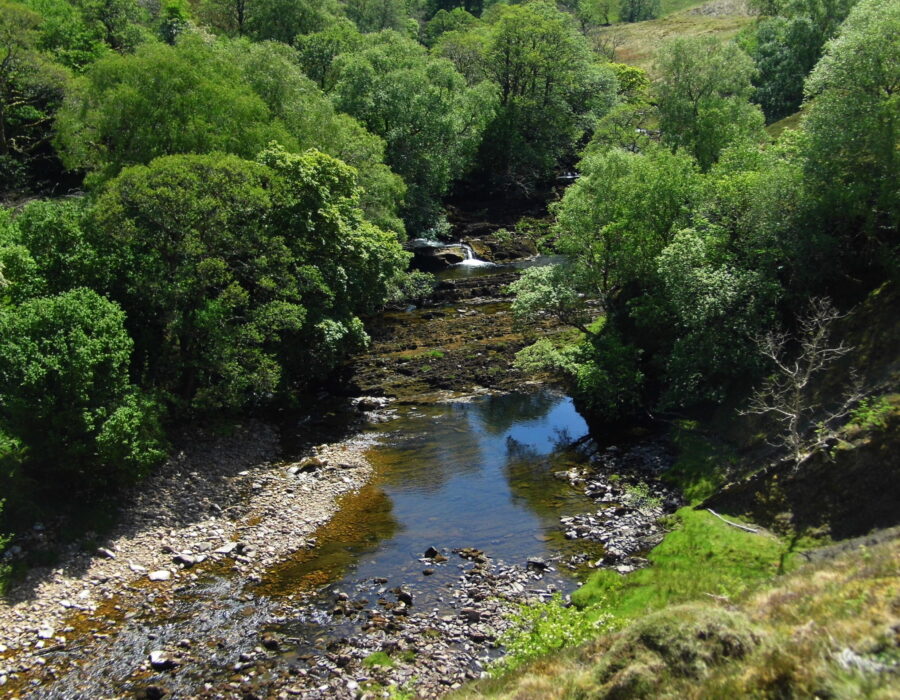 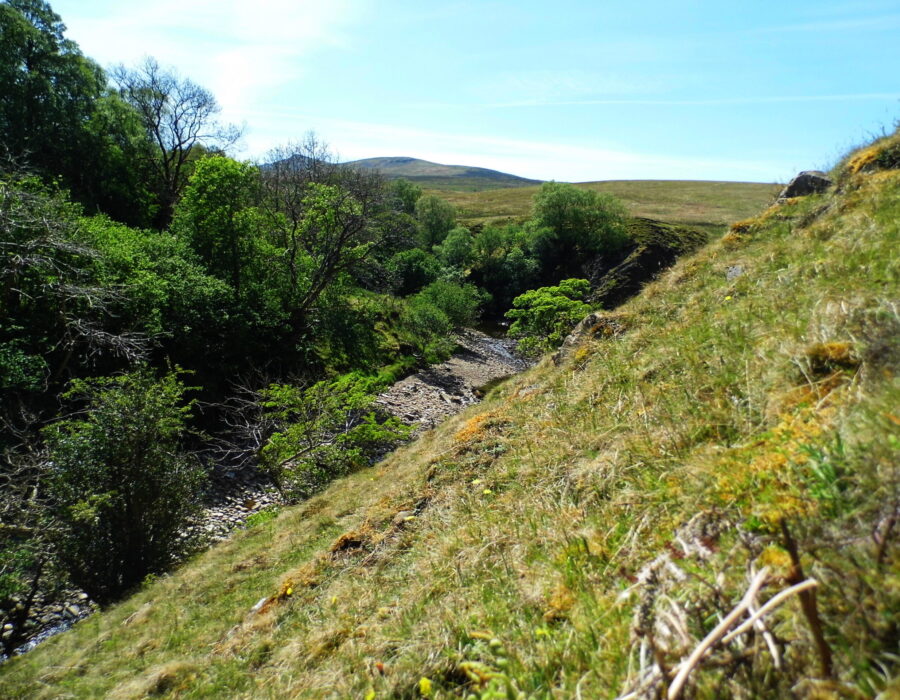 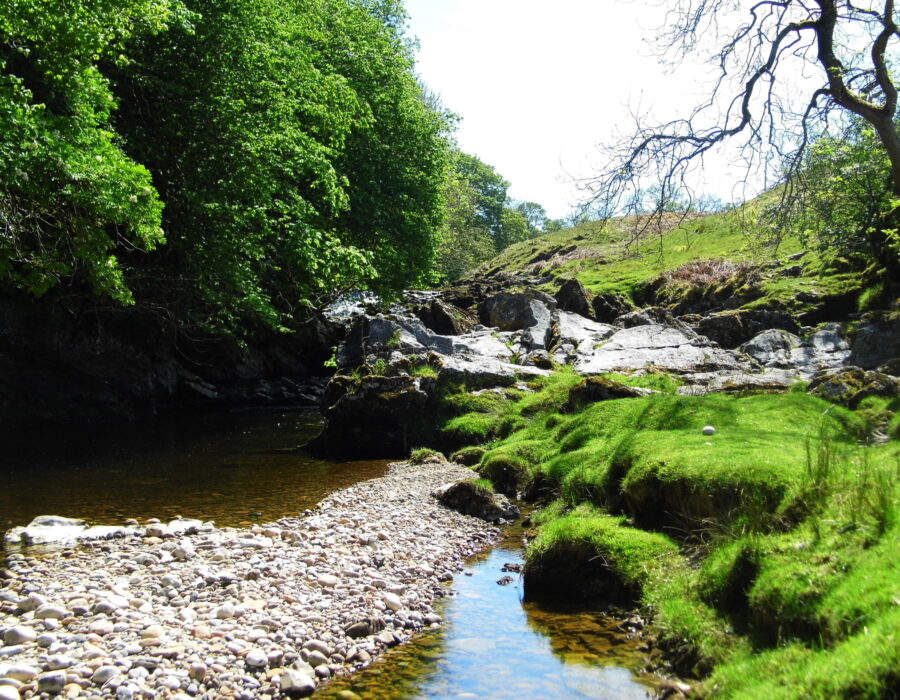 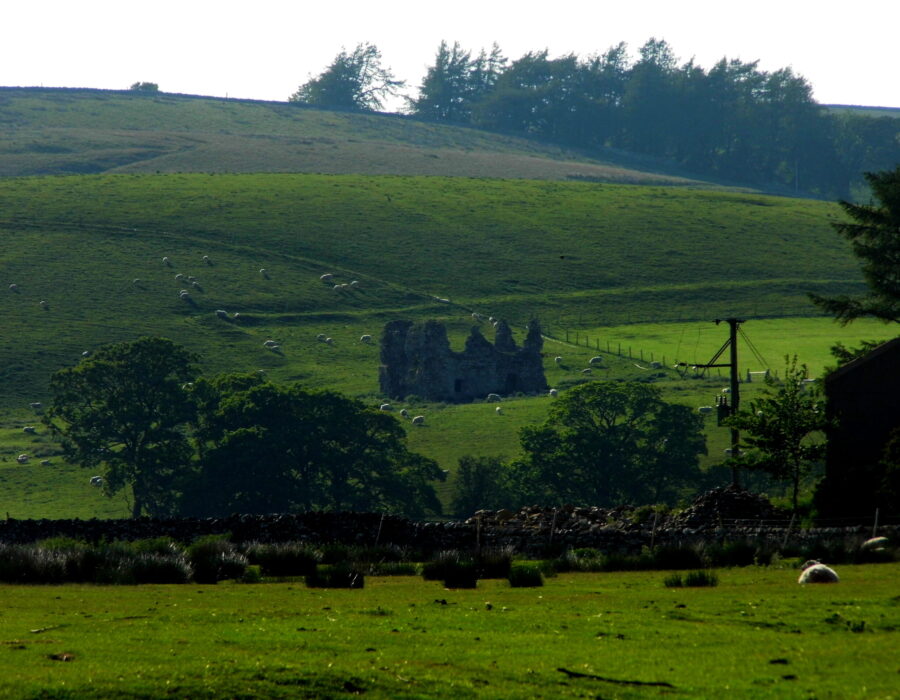 Janny Wood (always pronounced “Jinny” by the locals) is a short stretch of the river Eden from Pendragon Castle to Watergate Bottom (“Watter Yat” in local parlance) in the valley of Mallerstang in the glorious Upper Eden Valley. Here, the Eden takes a series of tumbles over small waterfalls creating a series of deep plunge pools. The western side of the river is largely treeless save for the odd alder and mountain ash and comprises open fell, grazed by sheep and ponies. The eastern side , however, has a profusion of alder, elm, hazel, rowan and ash, amongst others, giving it the wooded feel that the place’s name alludes too.

Just to the North of Pendragon Castle there is a small road (known universally as “Tommy Road”) that leads up to the open fell heading roughly west. After crossing the Eden over a narrow bridge and heading uphill and around a hairpin bend there is a cattle grid. You can normally park here on the open fell and then pick up a bridle path that heads down the valley in a northerly direction. However, instead of sticking to the path, as most do, is best if you divert from it, head downhill, and follow the river edge as closely as is possible. The going is difficult in places as the Eden has carved out some quite interesting (and steep) features that make a bit of agility a requirement. In summer the bracken is pretty thick so watch your step and keep an eye out for ticks. For those who enjoy nature, you may glimpse kingfishers and herons hunting-out the brown trout present in the pools or, if you are lucky, a red squirrel climbing amongst the hazel. Above you, gliding on the thermals rising from the fell, there will be buzzards and other birds of prey keeping a keen eye out for their next meal. If rocks are your thing, you will appreciate the limestone features that have been eroded, carved and polished by the river over the millennia and the excellent views of Mallerstang Edge, its multiple layers of millstone grit rising up to 2300 feet over to the east. During periods of low water, there are several places where a good swim can be had – the river tends to have a brownish hue due to peat but is pretty clean and during the summer the water can get quite warm. Janny Wood is never busy and for those who enjoy getting away from the crowds this is a very easily accessed piece of seclusion where one can enjoy nature, peace and quiet and, if the mood takes you, a bit of wild swimming.

By the time you get to Watergate Bottom the river levels out and becomes much less interesting. Near the river some hump-like features known as “Giants Graves” can be seen that are, evidently, pillow mounds – artificial rabbit warrens constructed in medieval times to rear bunnies for food. It appears that rabbits, which are an imported species, were not fully adapted to living in chilly Britain when they arrived from the continent and needed a bit of love and affection for them to thrive. Evolution seems to have fixed that problem for them. Rising to the west of Watergate Bottom is a hill known as Birkett – climb up this and you will get a fantastic view of the Eden Valley one way and Wildboar Fell and Mallerstang the other.

From here it is worth carrying on walking down the west side of the river into Wharton where you will see the ruins of Lammaside Castle (two castles in less than two miles, not bad!) and, a bit further along, the impressive—and still lived in—Wharton Hall. Footpaths just after the hall can take you to Kirkby Stephen along a farm road or lead you back down to the river where, after crossing it, you will arrive at the little village of Nateby after half a mile or so. From here you can then walk to Stenkrith park where the Eden becomes much more interesting again. Most notably, there is the feature known as the Devil’s Grinding Mill (or as the locals call it, after a fashion, “Coop Kernan Hole”) where the Eden falls through a collapsed cave system into a deep pool under the road bridge that spans the river here. This feature creates an impassible obstacle for the Atlantic salmon that run up the Eden during the autumn, and they can be sometimes be seen lolling in the pools here, their innate desire to keep on heading upstream frustrated by geology. Sadly, they are not as common a sight as they once were. From Stenkrith a nice walk can be had along the old railway to the village of Hartley with the potential to divert to the interesting little geological feature known as Ewbank Scar, a walk that deserves a story all of its own.

To get to Janny Wood simply follow the B6259 from Kirkby Stephen heading south towards Hawes for about four miles.  Just before Pendragon Castle there is a turn off that leads across the river and heads up towards the fell.  Stop after the cattle grid and start walking!