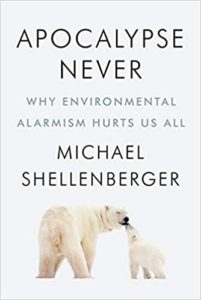 Alarmed? According to this author we should take a different approach to climate change

I have to admit that I bought this book with the sole intent of doing a hatchet job on it. After all, when a book on something as important as climate change gets a glowing review in the not so august pages of the Daily Mail one is initially on guard and the bulls**t detector has to be turned up to 11.  However, I was pleasantly surprised by some aspects of this book...not all, but some. This notwithstanding, there is a whole lot more that is wrong with ths book, and here are a few reasons why.

The overall thesis of this book is that the alarmism associated with climate change that is currently sweeping the planet is counter-productive and misguided. Using the actions of those lovely Extinction Rebellion folk who have crawled out of the English Shires by way of example, Shellenberger wants us all to sit back, take stock and think long and hard about how we address climate change and environmental catastrophe.  According to this widely lauded eco-warrior, just about all our thinking regarding climate change, species loss, food production, energy production, ecological despoliation etc is wrong and based on erroneous information.  His book is a curious mix, at least to this reader, of the crass, the irrelevant, the misunderstood (by him), the disingenuous and, and this is the major caveat, the surprisingly insightful.  I ran the full gamut of emotions as I read it, from anger at some of his more stupid assertions to the calm realisation that in other bits he may, just may, have a point. This book is by no means an echo chamber for those seeking a large dose of confirmation bias, whichever camp you may reside in, and must be read critically.

Let me give you some examples of his thinking.  His big bug-bear is the fact that lack of economic development is fuelling ecological disaster across the globe, as underdeveloped energy-poor nations denude their environments in search of food and fuel. He uses wood burning and small-scale agriculture in Africa as a major issue.  He then points to the wondrous achievement of the developed world and then drags out a load of misleading stats to illustrate his points.  Contrary to popular belief, statistics do not lie and the falsehoods reside within the context that they are used and Shellenberger is adept at taking a number to illustrate this or that is a fact when the truth is, as always, much more nuanced and complex.  Similarly, he is clearly an accomplished quote miner, giving us just the piece of information he wants us to have without giving us the next line.  In some cases he is just plain wrong or uses extremely weak sources to substantiate his claim. Two examples will suffice to give you an idea of what I am getting at (I could have used hundreds of examples but I am just too damn lazy to chase down all the sources he uses).

Once you get to understand that Shellenberger plays fast and loose with facts, finds that any old quote will do and bases much of his thesis on other people’s opinions and not peer-reviewed research one begins to doubt the veracity of just about every statement. As such, his arguments associated with deforestation, extreme weather events, agriculture, plastics etc all become easily dismissible once one turns to some authoritative sources of information (or actually reads the sources he so readily misrepresents). There may be a scintilla of truth here and there, in some cases maybe more, but once you realise how poorly some of his arguments are backed by fact one starts to dismiss all of them without even checking.  A further good example of why much of the early portion of this book comports so poorly with reality can be illustrated with the stance taken on livestock farming, particularly intensive beef.

Somewhat cloyingly, the book’s points are continually illustrated by personal anecdotes and chats he has had.  Shellenberger has quotes left right and centre from folk whose opinions are probably no more relevant than yours or mine.  Interspersed with these are stories of person x or y, from some far flung land, to demonstrate that such and such an approach is good.  All mostly guff and it makes the book read in parts like an essay produced by a moderately intelligent teenager with intermittent access to Google.  The book is extensively referenced but I strongly suspect that many these have been cherry picked for the paper/article/blog post/news item that resonates with the point Shellenberger wants to make and not because it represents any scientific consensus.  Shellenberger is not a scientist, nor is he a critical thinker, and it shows on just about every page.

The erstwhile eco-warrior begins to make a little more sense to me later on in the book where he examines an area that I was largely ignorant of.  This issue being that of how the fossil fuel industry has often funded environmental groups in order that they can act as their proxies in their efforts to ensure the decline of nuclear power in the US.  I would never have thought that luminaries such as Al Gore or Jerry Brown (former greenie governor of California) have had fiscal dealings with the fossil fuel industry but it would appear that they have. The family of the current incumbent of the Governor’s mansion in Sacramento, Gavin Newsome, also has a few skeletons in the cupboard that I was unaware of.  The book also points out how western environmental groups seem ever so keen to oppose energy projects (mostly hydro) due to environmental reasons in, for example, Africa that could provide abundant energy to the masses and, as a result, ensuring that they remain wood-burning, forest-destroying, energy-poor states.  Effectively, western agencies are saying what is good for us is no good for them...hypocrisy running wild.  He mentions the hostility that many locals feel towards the various western organisations that trot around Africa telling the locals what is good for them. This is a point that I can relate to having recently visited Uganda and seeing the contempt many of the Ugandans I met had towards the SUV driving aide people who lived in their nice wired-off compounds high up in the exclusive bits of Kampala. He ends up effectively saying that the continual opposition of effective measures to produce clean energy by environmental groups is worsening the problem not mitigating it.  Here he is probably right.

Another area that Shellenberger brings up that is worth mentioning is the IPCC and some of its shenanigans. Evidently they are not beyond a bit of exaggeration here and there, particularly in their summary reports that are aimed at the likes of you, me and the hacks that put them in the news.  This has generated some discord amongst the great and the good that sit on its various panels.  I am not sure just how important this all is beyond the fact that the alarmism that Shellenberger is balking at is, at least in part, being stoked up by unscientific proclamations from the IPCC, the very body that should be completely straight with us 100% of the time.  And by the time such proclamations get into the hands of a certain type of person in the public eye it becomes “...we have just 12 years to save the planet for annihilation” type hogwash (see Alexandria Ocasio Cortez’s mutterings of the subject if proof be needed).

This is, at least in limited way, a half decent book - not brilliant and not terrible although I admit I have largely dwelt on the negative here.  Approach it with an open mind (but not so open that your brain falls out) and there is enough in here to at least make you think.  It is reasonably well written and is never tedious. However, in some places the book is dangerous as it lends succour to the “business as usual” brigade whilst in others it can be illuminating. I was troubled by the author’s deliberate attempts at misinformation, however, which severely hindered any attempt on my behalf to be fully unbiased when appraising this book.  I suggest you read it yourself and make up your own mind. I will give it a solid but unspectacular 5½ out of 10.