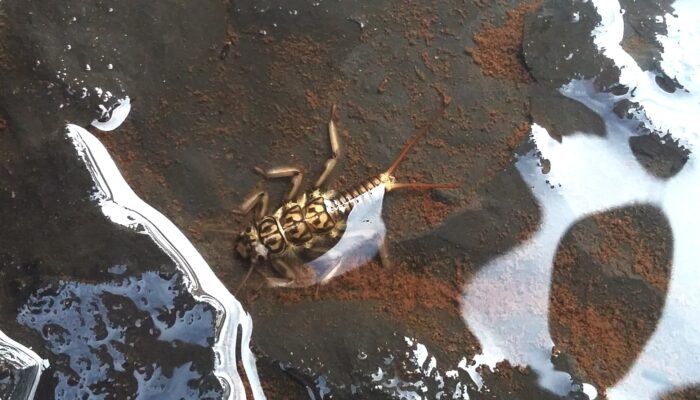 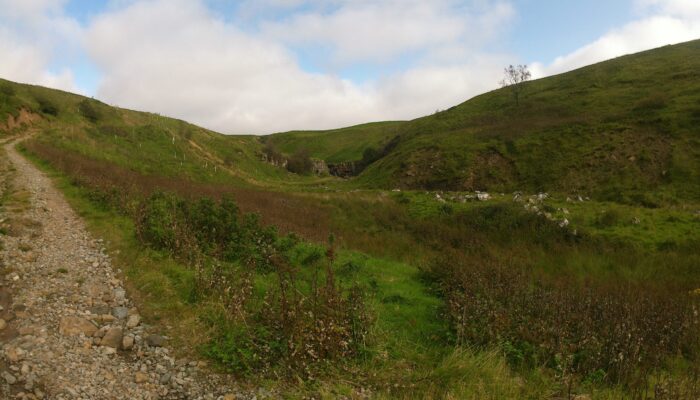 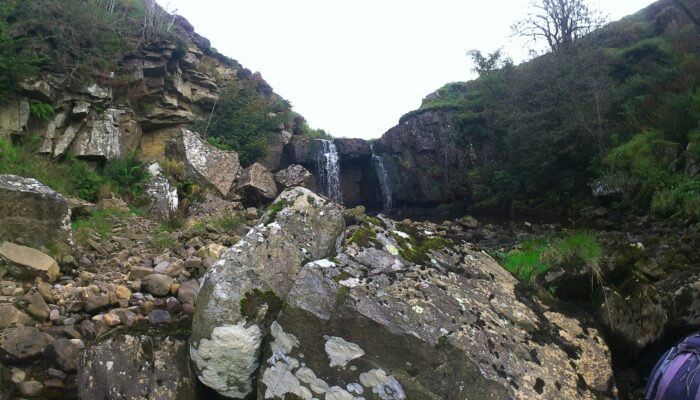 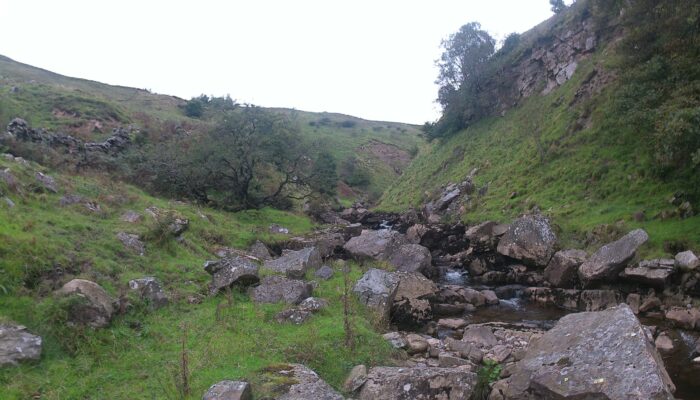 Just to  the north of the village of Brough the Pennine range looms large and, within these hills, are numerous interesting places to visit and many paths are very well-worn.  However, one of the perhaps more overlooked places that is worth a visit is Swindale Beck*, a small river that runs off the fell through various cuts and gulleys down to Brough where, in bygone times, its flow powered three mills.  A walk down most of the beck’s course is possible as the land is open access and, over the course of two or three miles of descent from the fells three waterfalls will be encountered along with beds of fossils, some nice limestone geology, and some excellent views of the Eden Valley and the Lake District lying beyond.

To pick up the beck it is best to drive about 3.5 miles up the B6276 road from Brough towards Middleton until you are almost at the top where, on a right bend there is a gravel track leading off to the left.  There is a flagpole here that flies a red pennant when there is live firing on Warcop Range.  The car can be safely parked on the verge here.  This track takes you in a westerly direction towards Swindale Beck   After about 800 metres leave the track as it starts to head uphill and, instead, continue west across the fell for about another 400 metres and you will reach the beck as it tumbles into a small gorge over a waterfall.  From here you can continue down the river side for almost two miles until you get to Swindale Wood where the open access land stops.  Here, footpaths on either side of the wood can take you further down the hill towards Brough or take you back up hill to where you started.

Along the way, between level sections of the river you will meet two waterfalls in addition to the one encountered at the start of the walk down the length of the beck.  Both are quite engaging and, although not very high, have cut quite steep valleys into the terrain as they slowly erode backwards through the limestone.  At one level section of the beck, at a point called Swindale Head, amongst the limestone there are some layers of dark shale and, just beneath this layer, a hard black rock.  In this black rock, which forms the bed of the beck in places, numerous fossils can be seen when the river is low.  The one pictured below is a crinoid, an ancient relative of starfish and sea urchins (Phylum Echinodermata).  These animals had an almost flower-like appearance with their crowns attached to a long stalk that must have waved in the ebb and flow of a  now long gone warm sea.  The disarticulated fragments of the stalk are the most commonly observed pieces of the crinoids but some more complete specimens are also visible.

The beck is very clean and, as a result, is home to the nymphs of stoneflies.  These curiously primitive appearing insects develop over several years in fresh water before emerging and moulting to a short-lived winged adult.  The one pictured above was photographed at the same place as the fossils, living on the underside of flat stones that were gently turned over to reveal the insect.  The antecedents of these stoneflies were present on earth during the Carboniferous and Permian geological periods, around 350-250 million years ago, the self-same time the fossil crinoids were being preserved in the stones that  the modern stoneflies now live amongst. 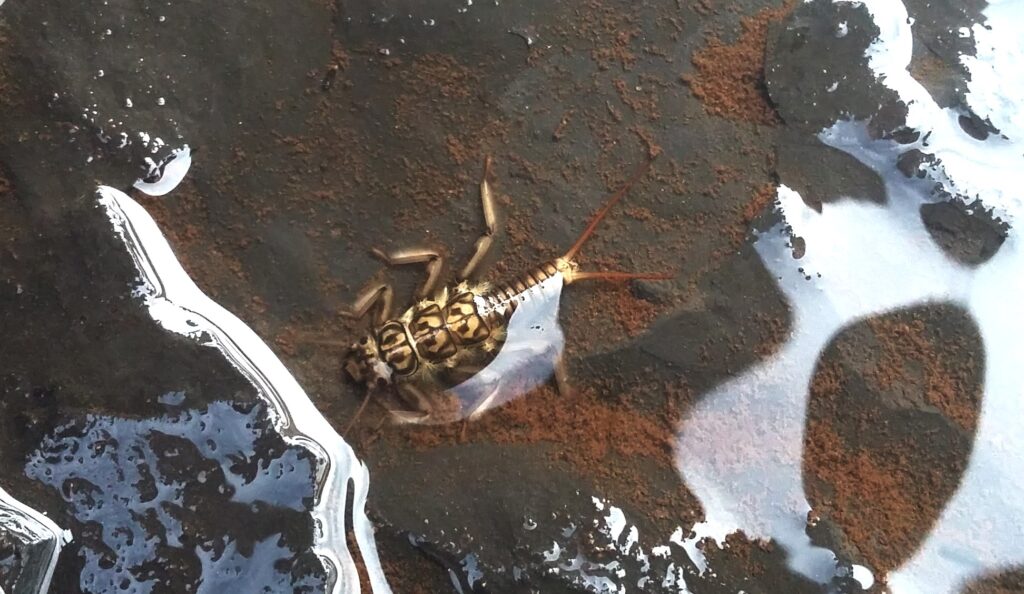 The stone that predominates in this area is known as the Yoredale series, a phase of rocks common in northern England comprised of limestone interweaved with beds of sandstone, shale and sometimes coal.  The point where the fossils appear is at one such place where a layer of the shale and a harder sedimentary rock lie between the layers of limestone.  Good views of the geology of this area can also be made at the waterfalls.

The lowest of the three waterfalls is the most impressive as it lies in a deep cut.  To reach the fall one must meet the beck lower down then walk back towards it along the edge of the stream. The waterfall, although not high, has generated a deep plunge pool that, should the whim take you, is good for swimming in.  Other pools along the way, though not large, are similarly deep enough for the hardy soul to take a dip (though they do shrink markedly in dry weather as the beck dries up in places - go to Janny Woods or Little Sleddale Beck for more guaranteed swimming if there is a drough).

You are unlikely to encounter other walkers on a walk down Swindale Beck and, although nothing here can be described as especially spectacular, this small beck is well worth a visit for a gentle walk down its length.

*Not to be confused with Swindale in the Lake District