The climate change brouhaha keeps on ratcheting up and perhaps now is a good time to look at some of the evidence that has been, quite literally, falling from the skies.  Last month (February 2020) has been wet in my neck of the woods, the Upper Eden Valley in Cumbria. Not just wet, spectacularly wet. No surprises there one might say as I am, after all, resident in the wettest part of England.  But the data tells us something quite extraordinary.  The last month has been phenomenonally wet. And warm to boot.

Taking data from the nearest professional weather station for the long-term averages (LTA; 1990-2010), a piece of kit sited at the Army training camp at Warcop, and comparing them with the data from the little meteorological wonder I have at the bottom of my garden, we see this...

Over the last month 320 mm of precipitation was recorded in my garden, an almost 4.5 fold increase over the LTA for just down the road. It rained on 24 days as opposed to the more usual LTA of 11.5 days and frosts occurred on only three days. Looking at data for England as a whole, 154.9 mm was recorded so poor old Cumbria got around twice as much rain as was the average for the country. This puts it near the top of the table when it come to deviance from the norm. Moreover, February is typically our coldest moth is these parts and we got below zero on just three nights and then only just (lowest -0.2°C).

And, just in case you are thinking a ten bob weather station in the middle of nowhere may not be entirely accurate, the Met Office concurs with my conclusion that the February has been well out of the normal bounds.  See: Record breaking February, mild winter on the Met Office’s website if you are interested.

If we look at the weather since May, when I set my weather station running, we can see that the summer temperatures were slightly hotter that the LTA whilst the autumn was pretty much normal.  The winter so far has been, however, much warmer.  In terms of rain, a similar trend is apparent with both the summer and winter markedly wetter whilst autumn was largely unchanged although in every month rainy day numbers were appreciably higher.  The frost days in December, January and February total only nine, just a quarter of what we may have expected from the long term averages.  This lack of frost will, almost certainly, have consequences for the phenology of a range of organisms that rely on a cold-snap as part of their normal biology. In an era of anthropogenic mass-extinction, this lack of cold may be just as damaging as too much heating. 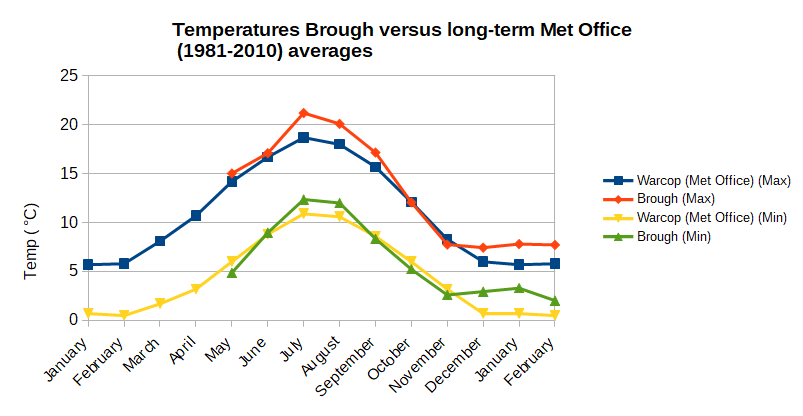 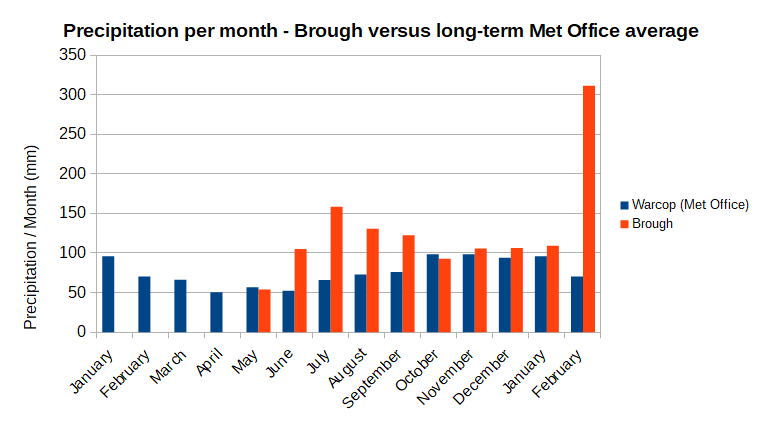 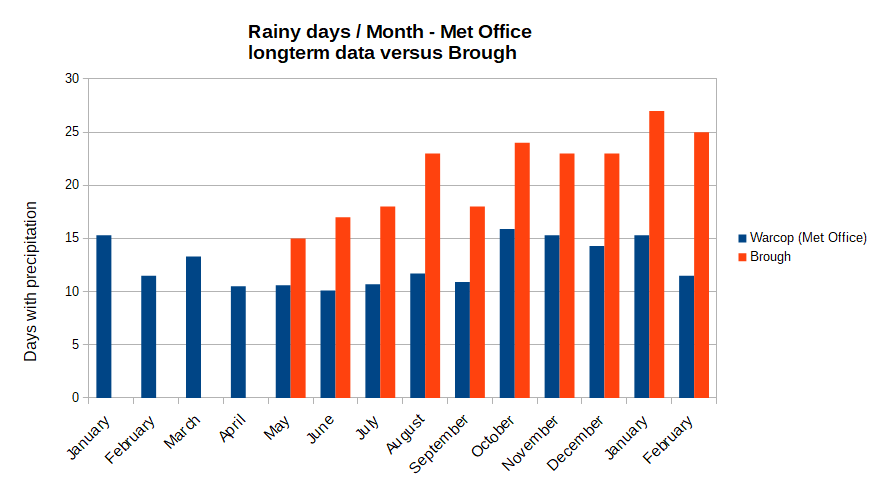 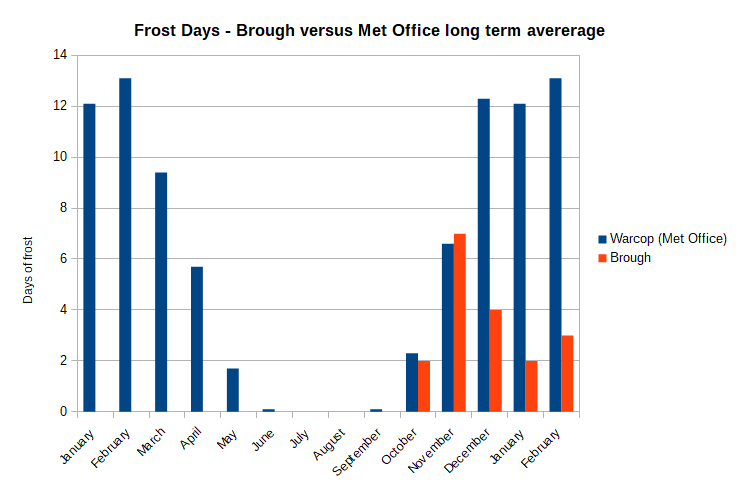 Of course, one winter of mild weather does not a trend make but, by any metric one chooses to use, this winter has been highly anomalous. When placed against the backdrop of the continual breaking of climate records around the globe over the last few years, it is difficult to deny that our climate is changing rapidly and, for the most part, in a direction of travel that is deleterious for humanity (and almost everything else living on the planet).

1 thought on “A very damp February in Northern England…”